Will Twitter Survive? What Elon Musk’s Takeover Means for Advertisers

Just before completing his $44 billion acquisition of Twitter, Elon Musk wrote an open letter to reassure advertisers that the platform would not become a “free-for-all hellscape”.

The letter, which was delivered appropriately on Twitter, and in the form of screenshots of text, stated that Musk acquired Twitter as he believes “it is important to the future of civilization to have a common digital town square, where a wide range of beliefs can be debated in a healthy manner, without resorting to violence.” He then emphasised to his audience that he didn’t purchase the platform to make more money, but to help humanity. The billionaire, who has previously said that he hates advertising, continued: “Advertising, when done right, can delight, entertain and inform you”. 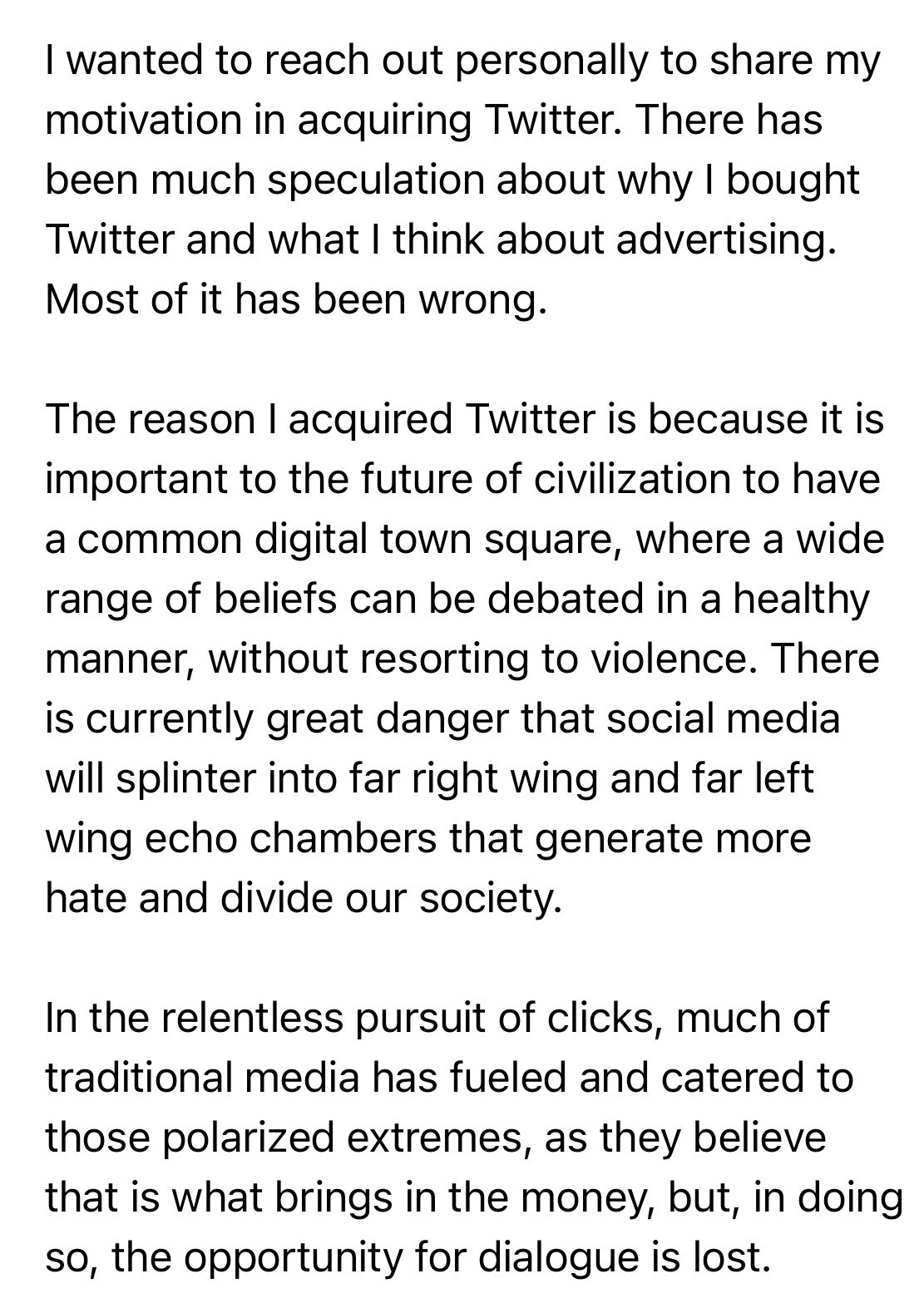 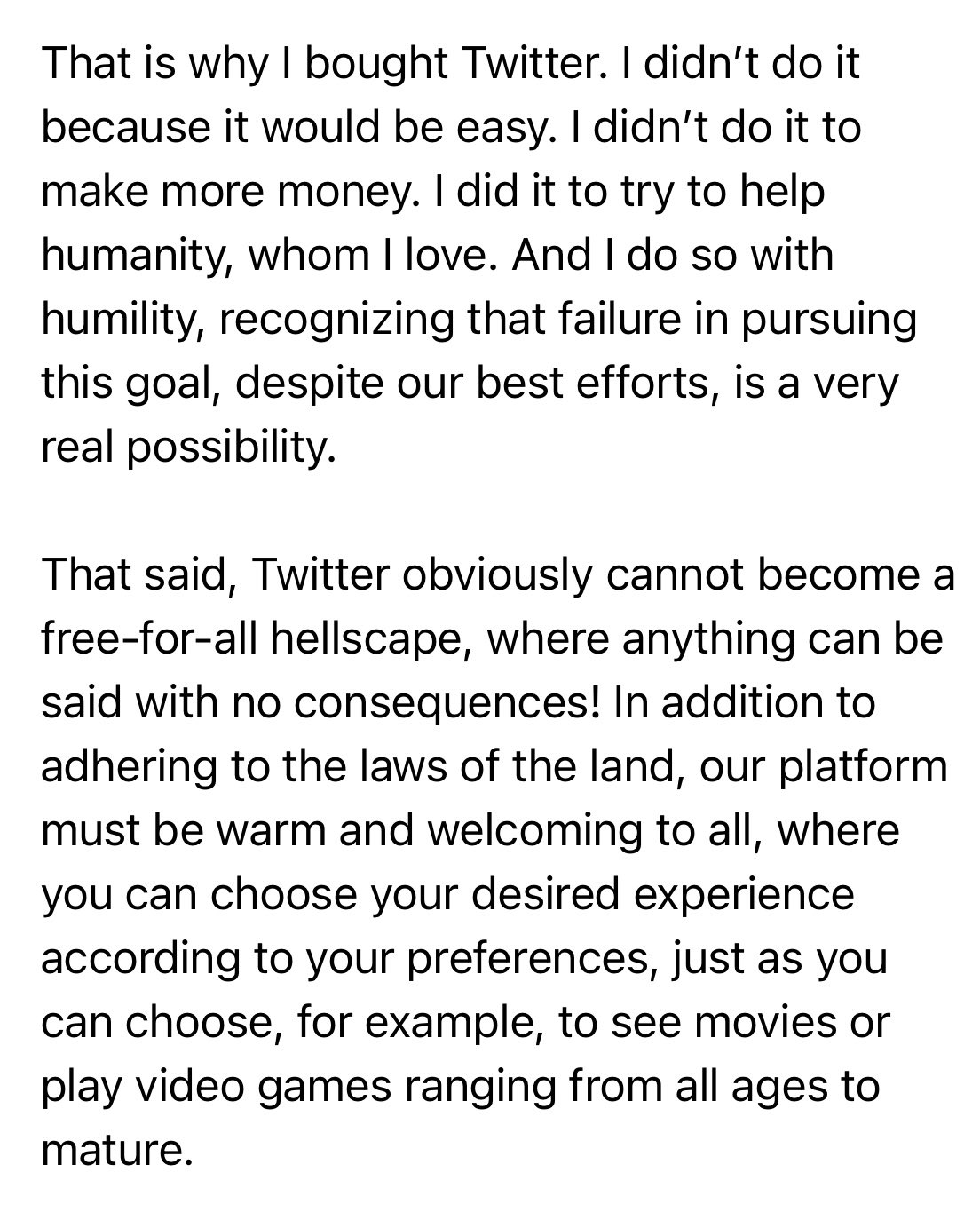 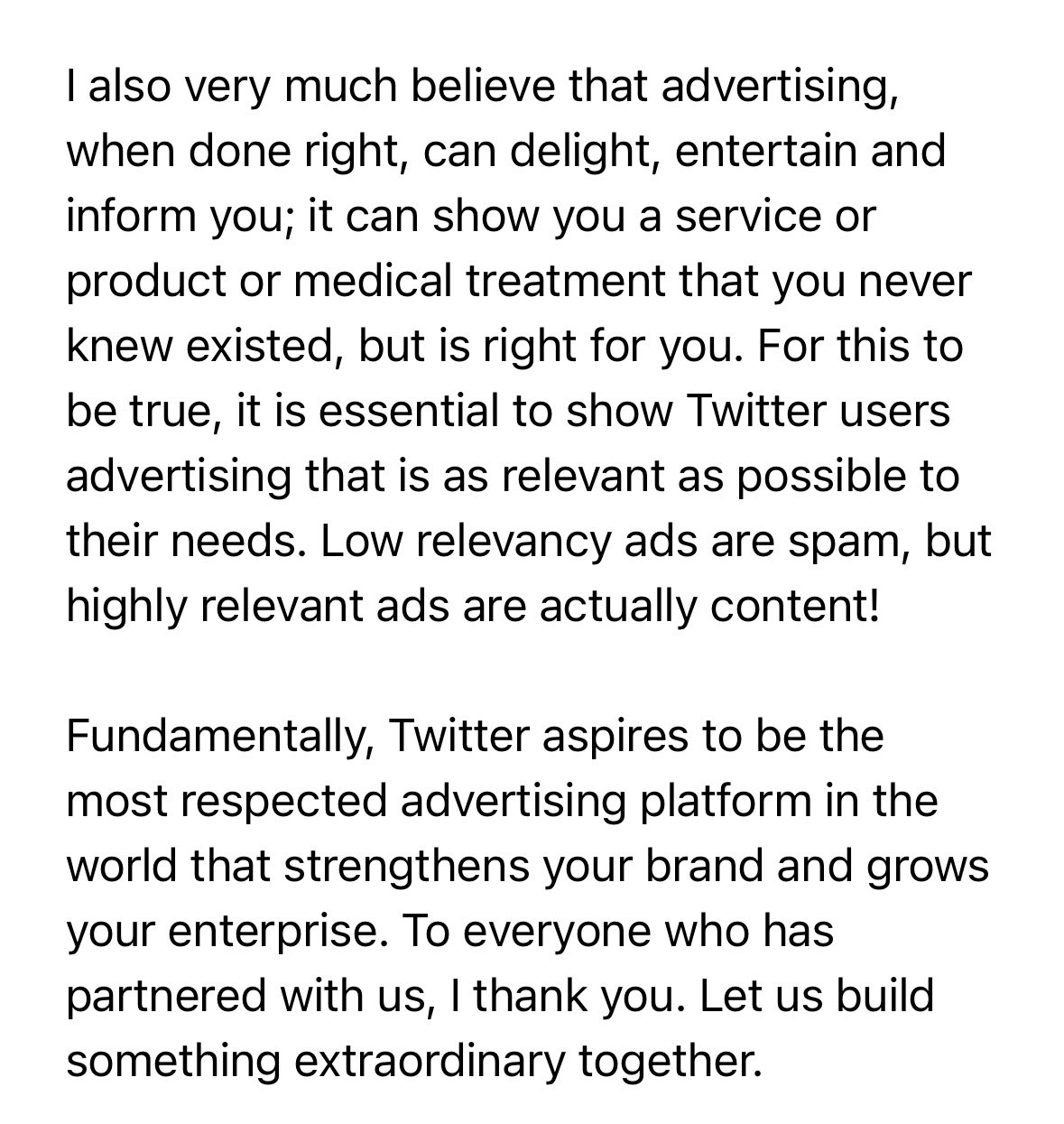 He then stated that the social media platform aspires to become “the most respected advertising platform in the world.”

The format of how this letter was delivered must have infuriated Musk, who has recently announced that “Twitter will soon add ability to attach long-form text to tweets, ending absurdity of notepad screenshots”.

We wouldn’t say that’s a bad idea though. Our social media team would surely appreciate a few extra characters when crafting their content every now and again.

As a social media marketing agency, we thought we would review everything that’s happened since Elon Musk became Twitter CEO, sharing our thoughts on where we see the social media platform heading. So far, we’ve seen Musk’s original attempt at reassuring the advertising industry quickly overshadowed by his first weeks as the new owner of the platform.

When and how did Musk become CEO of Twitter?

Elon Musk’s journey to owning Twitter isn’t plain sailing. It began at the start of the year in January, when he starting investing in Twitter, and by March, he was the largest shareholder in the company.

After he disclosed this fact to the public, Twitter shares increased by more than 27%, and it was then announced that he would be joining the company’s board of directors in March. But just a few days later, Musk announced that this would no longer be happening.

In the same month, the investor offered to buy Twitter at $54.20 per share, which amounted to a 38% premium above where the price stood a day before Musk’s investment in Twitter became public knowledge. Twitter then adopted a “poison pill provision” to prevent this happening, to dilute the shares owned by Musk and make it more expensive for him to purchase the company.

Eventually, Twitter accepted Musk’s offer, but in July, Musk announced his intention to terminate the agreement, asserting that Twitter had breached their agreement. Twitter then filed a lawsuit against Musk, and a trial was confirmed for October.

Musk then announced that he would move forward with the acquisition, and the deal was closed on October 27, with Musk immediately becoming Twitter’s new owner and CEO. He made some immediate changes which included firing employees and top executives and dissolving the board and chair. As such, he is now the sole director of Twitter.

How are advertisers impacted by Musk’s acquisition of Twitter?

Changes in ownership combined with Musk’s commitment to freedom of speech has led to an immediate reduction in confidence from advertisers across multiple industries and countries. The billionaire has already promised to review Twitter’s content moderation policies and undo permanent bans of controversial figures, which is causing rising uncertainty from brands.

The bottom line is that brands don’t want their content running alongside toxic content such as hate speech, pornography and misinformation. And with ads accounting for 90% of the company’s revenue, it’s essential that Musk tries to keep businesses onside.

Musk knows this, and he has already tried to think of ways to reduce the platform’s reliance on advertisers, suggesting a subscription that charges verified users $20 per month for their blue checkmark. This sparked outrage across the internet from critics including author Stephen King, who made his thoughts very clear. King tweeted:

Musk hit back directly to King with:

“We need to pay the bills somehow! Twitter cannot rely entirely on advertisers. How about $8?”

Since this interaction, it has become clear that this is the route Musk has decided to take, and Twitter Blue is now beginning to be rolled out across America. Twitter defines it as “an opt-in, paid monthly subscription that adds a blue checkmark to your account and offers early access to select new features, like Edit Tweet.”

We’re not quite convinced on this. Verified accounts have never really been seen as a perk on the platform to the average user. Instead, they help everyday readers determine whether a comment being made from a celebrity, political figure, or anybody with influence, is behind the tweet, rather than an impersonator.

It’s also highlighted how easy it would be for users to pay for the subscription and change their name on the platform, which would increase the spread of misinformation. This must have been pointed out to Musk, who then announced that accounts engaging in impersonation without clearly specifying would be permanently suspended.

Essentially, Musk changed something that didn’t need to be changed and has now had to come up with new rules and regulations to prevent something - that was never an issue before - happening.

Do these new changes help increase confidence in the platform for advertisers? No.

Advertisers have gone on pause. General Mills, the company behind the Cheerios and Lucky Charms cereals has suspended advertising on Twitter, joining General Motors, Volkswagon Group and Pfizer (to name a few).

Twitter is already feeling the impact, and Elon Musk has stated that they’ve seen a “massive drop in revenue” because of this. Musk doesn’t blame himself, but instead “activist groups pressuring advertisers”. Because taking accountability would be too easy.

What will Twitter need to do to win back advertiser confidence?

It’s a difficult one. As we see it, the new policies Musk is illustrating mean that the worst trolls could thrive, even if he is dedicated to forming a new “content moderation council”. The use of a “content moderation council” also makes it all seem a bit dystopian and dictator-y to us, and with Musk now having full control over the company, it also means he could use this as an opportunity to push his own politics and opinions.

If the increase in hate speech on the platform already is anything to go by, brands must ask themselves where they stand and the values their company embodies. It doesn’t seem like anything too dramatic has changed yet – Musk has reassured users that nothing will change, and no users will be reinstated until the content moderation council meets - but that doesn’t mean change isn’t on the horizon.

Musk needs to be careful here too, and he’s likely to face an uphill battle if he wants to win back the trust of businesses and corporations. Twitter’s digital advertising business is much smaller than Meta, Google and Amazon, and it doesn’t have the same level of growth as TikTok. Perhaps brands should consider if their money is better spent elsewhere.

Saying that, however, Twitter does have great targeting features, and increasing rules and regulations around advertising on Facebook over previous years has made Twitter a better choice within some industries, like the housing market. But if Musk doesn’t set clear strategies and rules (rather than what seems currently to be random tweets when an idea pops into his head), confidence in the platform will continue to decrease, which will impact the overall profitability and usability of the platform.

The next few months will be a truly make or break period for Twitter. So, let’s see what happens.

Our digital agency in Birmingham

As a local advertising agency, we work collaboratively with our clients to optimise their budgets in the best way possible to increase their return on investment.

If you would like to find out more about our advertising and wider marketing services, please contact us on 0121 236 1060 or via hello@clevercherry.com.

More from the blog

Thank you for your enquiry!

We'll get back to you within the next 2 - 3 days, in the meantime why not browse some of our latest work.